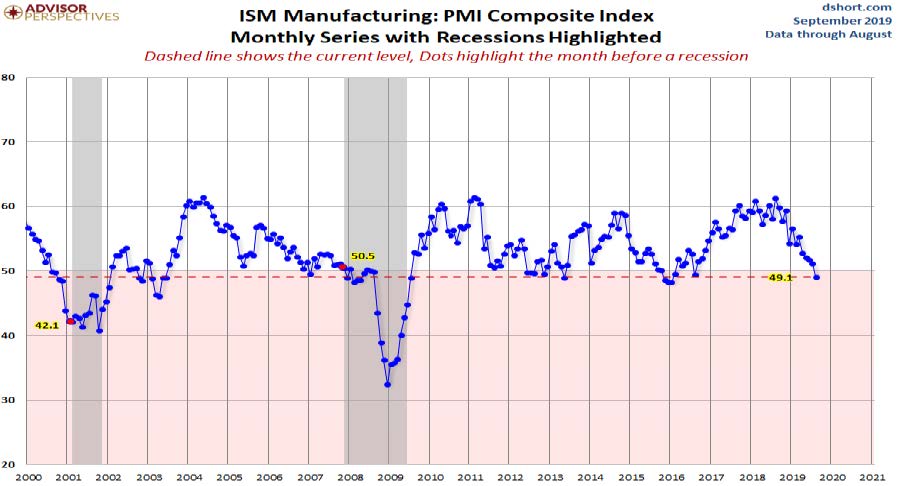 U.S. employers added 130,000 new jobs to the economy in August, below the estimate of 150,000. The unemployment rate held steady at 3.7% while the broader U6 unemployment rate increased from 7% in July to 7.2% in August. Wage growth remained solid, with average hourly earnings increasing by 0.4% Q/Q or 3.2% Y/Y. The June and July reports were also revised lower by a total of 20,000 jobs, bringing the three-month average down to 156,000. Excluding government hiring, private payrolls grew by just 96,000, the lowest pace since February. The pace of job growth in the U.S. has definitely slowed in recent months, but it remains at healthy levels and continues to be one of the bright-spots in the economy. There has been a lot of concern that the negative impact from the trade war with China and slowing global economy will eventually spill over into the U.S. labor market.

Manufacturing has been rolling over across the globe in 2019 and the U.S. finally succumbed to growing uncertainty over the trade fight with China. The ISM Manufacturing Index fell to 49.1 in August from 51.2 in July. A reading below 50 suggests manufacturing is contracting. The new orders index sank 3.6 points to 47.2 and the production index fell 1.3 points to 49.5. Most key PMIs around the world have fallen below 50 this year and that spells trouble for the global economy. The U.S. has held up better than most countries, but the manufacturing sector has been hammered by U.S.-China trade tensions. The key question is if the contraction in manufacturing will lead to a downturn in the broader economy. That could happen if businesses stop hiring and begin to shed workers.

The strong rebound in the ISM Non-Manufacturing Index was a positive sign for the U.S. economy. The ISM NMI rose from 53.7 in July to 56.4 in August, led by strength in business activity/production and new orders. The employment component weakened, but continues to sit at a healthy level. Respondents remain concerned about tariffs and geopolitical uncertainty, but they are mostly positive about business conditions.