Economic data is all over the place! It is once again all about the Fed

Economic data in the U.S. remain mixed with solid numbers coming from labor and housing markets, but weakness in manufacturing, trade, business spending and even the services sector. After experiencing weakness in May, labor markets rebounded sharply in June. Employers added 224,000 new jobs to the U.S. economy last month and this was well ahead of expectations. The unemployment rate edged up to 3.7% as more workers entered the labor force, but average hourly earnings growth remained flat at 3.1%.

Manufacturing has weakened throughout 2019, but June’s ISM reading was ahead of expectations at 51.7. Employment and production strengthened while new orders showed some weakness (consistent with weakness in the global economy and subdued global trade resulting from trade tensions). The U.S. services sector weakened in Q2 due to softness in new orders, production and employment. The service sector has slowed, but it continues to sit at a healthy level. Businesses continue to highlight labor shortages along with uncertainty over tariffs. 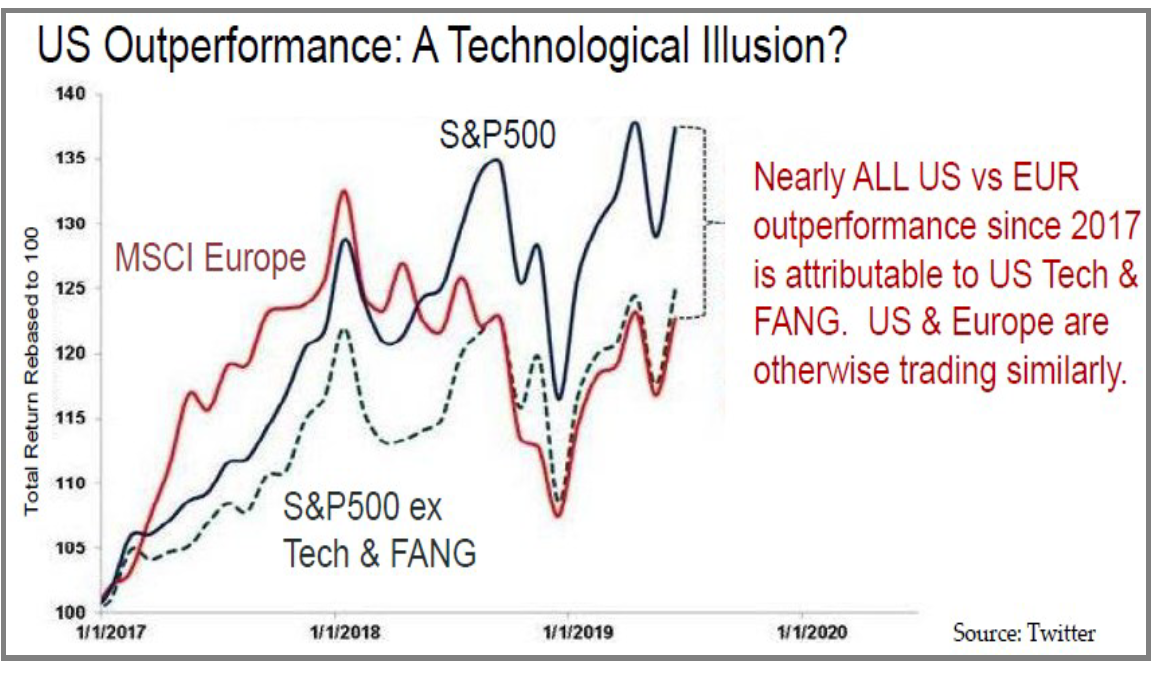 Retail sales surged 0.5% in May after rising an upwardly revised 0.3% in April. Core retail sales increased at a similar clip and that bodes well for consumer spending and Q2 GDP. Durable goods orders have been weak in 2019, but May’s report showed a slight rebound in core capital goods orders and shipments. The Fed has highlighted weak business spending trends as a reason to cut rates.

Inflation increased last month, but it remains well within the Fed’s 2% symmetric target. CPI rose 1.6% Y/Y, but Core CPI did jump to an annualized rate of 2.1%. The Fed focuses on the Core PCE Index (1.5% Y/Y) and that has consistently undershot their 2% target. It has once again become all about the Fed and central bank policy. The global economy has weakened and this has forced the Fed and others to come to the rescue. A reduction in trade tensions should help alleviate some global economic uncertainty, but inflation remains low across most countries and this should allow central banks to pursue more accommodative monetary policy.

Earnings should rebound as we move towards 2020

Q2 S&P 500 earnings are expected to decline 3%, down rather substantially since the start of the quarter. Analysts are forecasting a fall in earnings for Q3, but a 6% rebound in Q4. For 2019, the analyst community projects 2.4% growth with a rebound of 11% in 2020. As always, we stress that companies are quite good at managing expectations and analysts are typically overly optimistic or overly pessimistic. For 2019, earnings are projected to fall in energy, materials and tech. The tech sector represents 21.5% of the S&P 500 and it has been a big driver of returns in recent years, especially the FANG stocks. A lot has been written about the dramatic outperformance of the U.S. versus Europe in recent years and much of that could potentially be explained by the higher allocation to tech/FANG stocks. When excluding tech/FANG, performance has been much closer between the U.S. and Europe.

EM growth continues to far outpace the developed world, but China is slowing, India has question marks and Brazil may slip back into recession

Emerging markets continue to look solid in terms of country and corporate fundamentals despite the noise. Chinese GDP growth came in at 6.2% Y/Y in Q2, its slowest pace since Q1 1992. This was in-line with expectations, but down from Q1’s 6.4% growth rate.Tariffs and the ongoing trade war with the U.S. are clearly having an impact on growth, but the government has provided substantial targeted stimulus in recent months and the positive impact may be starting to show. Key data such as industrial production and retail sales both beat expectations in the past month and that could be a sign that easing measures may be starting to work. Both the Caixin and official state manufacturing PMIs fell below the key 50 level in June and that is a definite concern as the country is still heavily driven by manufacturing and government investment. Service sector PMIs sit around 52, indicative of a healthy consumer, but recent import data showed some weakness.
India is facing what could be described as a confidence crisis due to slowing growth, high unemployment and questionable economic reporting. GDP growth slowed to 5.8% in Q1 (lowest in 2 years), but a well respected economist questioned the methodology behind all economic data reported. The main question was how the country can be growing at such a fast pace when most other indicators suggest stagnating growth. This is something to watch moving forward as growth over the next few years is projected to be in the 7-7.5% range.

The eurozone grew more than expected in Q1 (+0.4%), but the region still faces numerous challenges with growth that was stuck at just 1.2% over the past year. The unemployment rate of 7.7% was the lowest since September 2008. The ECB expects growth of 1.2% in 2019 and 1.3% in 2020. The ECB attempted to end its QE program in 2018 despite deteriorating growth, but they have been forced to reignite bond buying to stimulate growth and inflation across the troubled monetary union. Additional stimulus may come sooner than expected with the transition from Mario Draghi to Christine Lagarde on October 31, 2019. Inflation remains stubbornly low and interest rates are already in negative territory.

Japan’s economy has delivered two straight impressive quarters of growth. GDP grew at an annualized rate of 2.2% in Q1, following a 1.8% increase in Q418. Business investment and falling imports were the big drivers of the better than expected reading. Inflation continues to be a major challenge for the BOJ despite interest rate targeting and the massive QE program in place. Stronger GDP may provide support for the planned consumption tax increase later this year. One headwind could be trade tensions in the region, especially versus China and South Korea. Trade tensions between the U.S. and China have impacted global trade, especially across Asia. Japan is a major exporter so any resolution should be positive for the economy and corporate fundamentals.