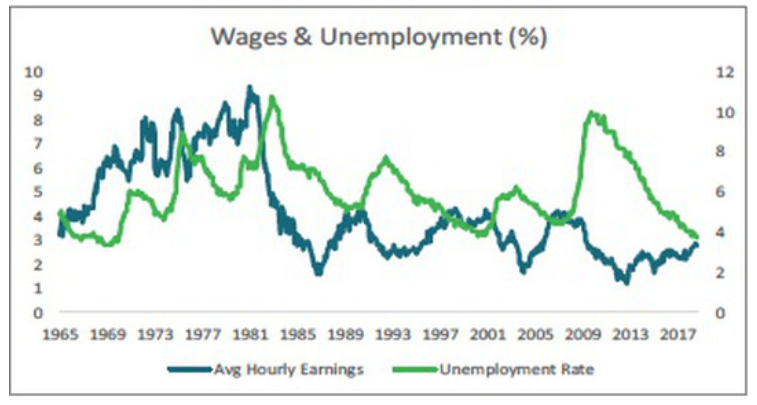 After a relatively calm summer where U.S. equities dominated, volatility has picked up sharply in October with the spike higher in interest rates. The 10-year Treasury yield hit a high of 3.23% before falling back to the current level of 3.16%. Hawkish comments from Fed Chairman Jerome Powell spooked investors initially, but recent reports on wage growth and inflation appear to have calmed fears a bit. We have also seen increased rhetoric from the White House and notable economists about an overly hawkish Fed that could squash the strong U.S. economy. All major equity benchmarks are negative MTD with particular weakness in small caps, growth and Asia.

U.S. employers added 134,000 new jobs to the economy in September, well below the 185,000 estimate, but the July and August reports were revised sharply higher. The unemployment rate fell from 3.9% to 3.7% in September, the lowest since December 1969. The broader U6 unemployment rate edged higher to 7.5%. Hurricane Florence was cited as an explanation for the softer September report although the overall numbers look good when factoring in the prior months’ revisions. Perhaps the most important piece of data in the September report was the slight dip in average hourly earnings. Markets have been laser focused on wage growth and that figure dipped from an annualized rate of 2.9% in August to 2.8% in September.

The ISM Manufacturing Index fell to 59.8 in September from August’s reading of 61.3 (highest since May 2004). The September reading was slightly below the 60.1 expectation as new orders and inventories rose less than expected. Production, employment and new export orders all registered faster growth rates last month. The U.S. services sector rebounded in September based on the latest ISM Non-Manufacturing Index data. The ISM NMI Index jumped from 58.5 in August to 61.6 in September, the highest reading since inception of the composite in 2008. All components of the report were quite strong led by particular strength in business activity/production, employment and new orders. Overall, corporations remain optimistic about business conditions and the future direction of the economy, but they are concerned about the impact from tariffs.

Durable goods orders rose 4.5% in August versus the estimate for a 2% increase. Orders for non-defense capital goods excluding aircraft, a closely watched proxy for business spending, dropped 0.5% as demand softened for computers and electronic products. Shipments of core capital goods (part of GDP report) increased 0.1% in August after an upwardly revised 1.1% gain in July.

U.S. retail sales barely rose in September as a rebound in motor vehicle purchases was offset by the biggest drop in spending at restaurants and bars in nearly two years. Retail sales rose 0.1% last month (+4.7% Y/Y) after posting a similar gain in August. Core retail sales increased at a healthier 0.5% clip in September and this bodes well for the Q3 GDP report.