Sayonara global growth! Trade tensions flared up in May, causing a selloff in risk assets

US Bureau of Labor Statistics

The global economy looks vulnerable to a downturn after a solid start to 2019. Economic data have weakened across the globe in recent weeks and uncertainty has increased with heightened rhetoric on trade and Brexit. The trade war between the U.S. and China has become more intense as both sides continue to blame each other for the failed deal and breakdown in talks. Brexit has essentially been punted down the road as Prime Minister Theresa May stepped down from her post to clear the way for new leadership.

President Trump threw further gas on the fire when he threatened to put a 5% tariff on all Mexican goods unless they take drastic steps to curb the flow of migrants across the southern border. The flight to safety trade was in full effect in May as global equities sold off and bond yields collapsed. The collapse in rates is sending a clear message that the global economy has weakened. Markets have rebounded in June as Fed rate cut expectations grew and as a deal was struck with Mexico.

weakens while the services sector continues to support the U.S. economy

Job growth slowed dramatically in May, another potential signal that economic growth has decelerated. 75,000 new jobs were added to the U.S. economy last month and that was well below the 180,000 estimate. The prior two months were also revised lower by a total of 75,000. The unemployment rate held steady at 3.6% (lowest since December 1969), but the broader U6 unemployment rate fell from 7.3% to 7.1%. Workers haven’t returned to the workforce as expected and that kept the participation rate steady at 62.8%.

All eyes were on the ever-important wage growth figure and that actually moderated in May. Wages grew at an annualized rate of 3.1% last month, down from 3.2% in April. The May employment report showed weakness, but it is a lagging indicator and we never want to place too much emphasis on one data point. Markets rallied sharply higher because the likelihood of interest rate cuts from the Fed have increased. Markets are now pricing in a summer reduction, likely in July, followed by another cut in September or October followed by a third in early 2020.

The ISM Manufacturing Index fell to its lowest level since October 2016 at 52.1. This was down from 52.8 in April with particular weakness in inventories and supplier deliveries. Production and employment actually strengthened. Manufacturing sits at the epicenter of the trade war and the impact is becoming more apparent with survey respondents expressing increased concern over the recent escalation. While manufacturing has weakened in the U.S. and globally in recent months, the services sector has remained a bright spot for most countries. The ISM Non-Manufacturing Index topped expectations by rising from 55.5 in April to 56.9 in May. Business activity, employment and new orders showed strength in the report although the survey indicated that respondents are still nervous about tariffs and the availability of skilled workers.

Muted inflation should allow the Fed to pursue an accommodative monetary policy stance moving forward. The latest CPI reading showed prices increased 1.8% Y/Y in May or 2% when stripping out food and energy. Core PCE, the Fed’s preferred inflation gauge, increased 1.6% Y/Y in April, up slightly from March’s 1.5% rate. Consumer spending also slowed in April with only a 0.3% increase, down from 1.1% in March. Consumer spending increased at a 1.3% annualized rate in Q1, the slowest in a year. U.S. retail sales fell 0.2% in April after surging an upwardly revised 1.7% in March. Retail sales are closely watched because they make up about 1/3 of consumer spending, a huge driver of economic activity.

Durable goods orders fell more than expected in April, providing further evidence that manufacturing and the broader economy were slowing after a growth spurt in Q1. The headline number fell 2.1% in April, and orders for non-defense capital goods excluding aircraft, a closely watched proxy for business spending plans, dropped 0.9%. Orders for non-defense aircraft plunged 25.1% in April, led by the collapse in orders for Boeing 737 Max aircraft. Boeing reported on its website that it had only four aircraft orders in April, down from 44 in March.

Manufacturing looks bleak in the eurozone and China, service sector is much healthier

Consistent with other countries, manufacturing in the eurozone took another turn lower. The IHS Markit Eurozone Manufacturing PMI fell to 47.7 in May from 47.9 in April. This marked the fourth straight month in contraction territory with much of the weakness coming from the regions export engine, Germany. Output and new orders were weak last month and potential risks to the outlook include Brexit, trade wars and the slump in auto demand.

Manufacturing activity in China fell back into contraction territory in May based on the latest official manufacturing PMI. The government’s official reading of 49.4 was below expectations and down from April’s 50.1 level. The smaller company focused Caixin/Markit Manufacturing PMI was a bit better with a reading of 50.2 in May, consistent with April. According to Caixin, the rate of growth in new business activity and new orders both strengthened last month. China’s services sector remains in much healthier shape compared to the manufacturing sector, but the ongoing trade fight with the U.S. will likely have an impact given the ongoing uncertainty surrounding key tech companies like Huawei. There is still little clarity over how China may respond to the blacklisting of Huawei by the U.S. The services sector remains healthy, but trends for key indicators such as retail sales have deteriorated. 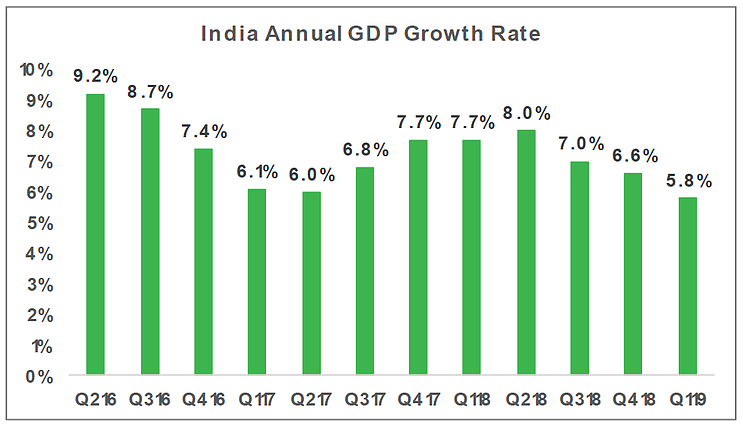 Prime Minister Narendra Modi won re-election in a surprise landslide victory. Modi has been in power since 2014 and his Janata party likely won 350 seats in 545-seat lower house of parliament. India has faced recent challenges of slowing economic growth, albeit from very high starting levels, and stagnant job growth. Modi has been good for business in India as he spent part of his first term cracking down on corruption (demonetization), simplifying taxes and overhauling the corporate bankruptcy system. Indian equities rallied to all-time highs on the news and while economic growth downshifted to 5.8% in Q1, the headwinds are considered transitory and looser central bank policy could potentially be on the horizon.

Equities look attractive vs. bonds, could the collapse in rates lead to a shift in asset allocation?

The market cap for global equities is about $85T based on the World Federation of Exchanges, and the global bond market cap is roughly $100T. A key question for most

investors is the proper allocation between equities and bonds. The equity risk premium is one way to gauge the attractiveness of equities to bonds. While there are different calculations for the equity risk premium, each should highlight the cheapness of global equities relative to global bonds. Based on 25 years of history, the equity risk premium is not as cheap as it was back in 2008 and 2011, but it is attractive relative to the historical average of 1.7. Stocks are risky, but as expected returns decline for bonds, equities look more compelling and this could lead to a shift in asset allocation by global allocators.